About once a month, I send out a newsletter with tidbits about projects I'm working on, new equipment I'm working with, and general musings about my fine art photography. If you'd like to receive it, just follow this link. 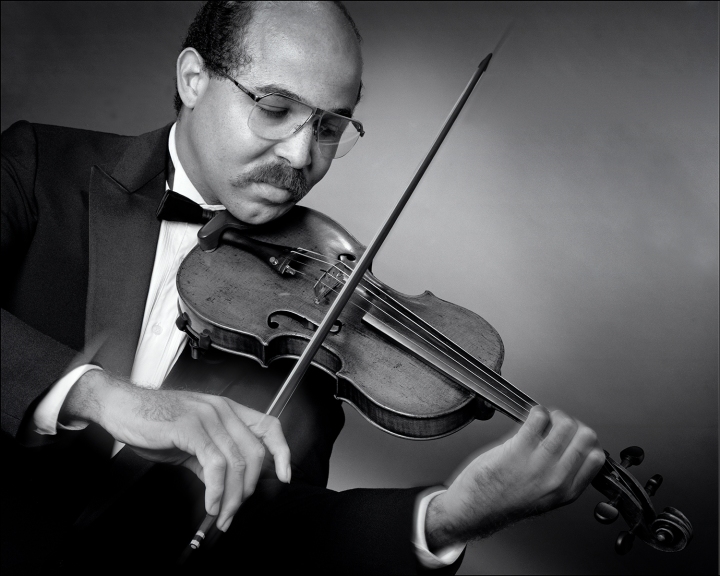 I’ve always liked photographing fellow artists, regardless of their art.

A few years ago I embarked on a project to photograph musicians. I contacted the Valley Symphony orchestra with a proposal to photograph all the principal musicians, including the conductor, and feature them in a traveling show. I thought they would jump at the prospect — boy was I mistaken.

You would not believe the static I got. I was so discouraged after dealing with the board I almost abandoned the whole project. I mean — I was offering it for free — it wouldn’t cost them a penny, plus they would receive tons of publicity as the show traveled around the Rio Grande Valley.

I decided that I love photographing musicians too much to be thwarted by a bunch of bureaucrats so I contacted each musician privately. They were ecstatic to be receiving so much attention. Just goes to show you that you never know how people will react to what you may think is a great idea.

Anyway, this is Marvin  Eagle. At the time he was the principal violinist. I invited him to my studio where we had a great time together I created many images, but this one was my favorite.

I did twelve people in all and the Brownsville museum of fine art hosted the show. It got tons of good publicity and really helped me get my name established as a fine art photographer. My photograph of the conductor Carl Seal placed in the top ten best portraits in the world under the rules governing PPA’s (Professional Photographers of America) International print competition. 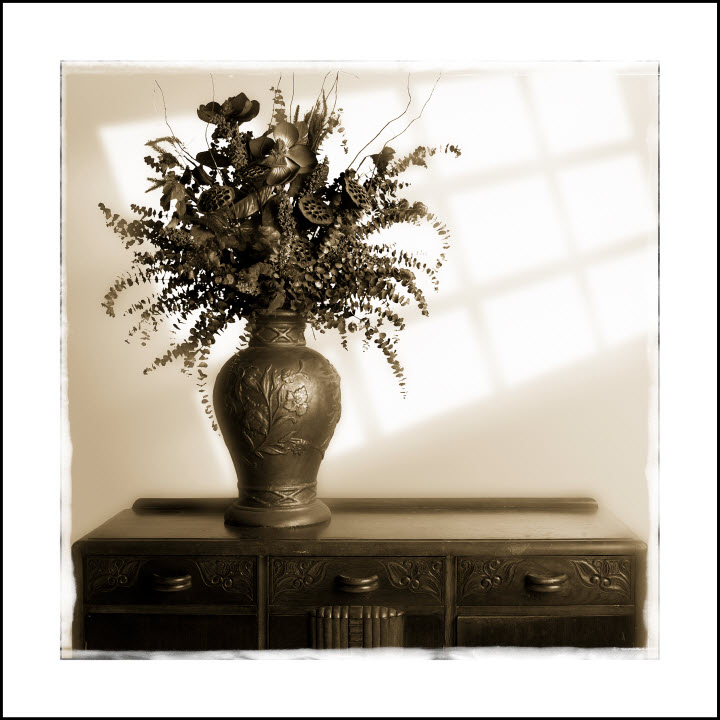 Memories are funny things. When I saw this cabinet in a local antique store I was immediately transported back to my childhood, remembering our dining room at home. There was an old buffet by the window and my mother always had it tastefully decorated with a bouquet of flowers. I thought about all of the good times we had together as a family and was filled with nostalgia. That’s what was going through my mind as I tripped the shutter on my camera.

I’m not sure why a happy memory made me want to add a bit of melancholy to the scene, but I decided on a B&W toned presentation. The word “nostalgia” is a combination of Greek words that mean “homecoming” and “ache/pain” so maybe it’s appropriate. I’m a very sentimental person and it reflects in much of my work. 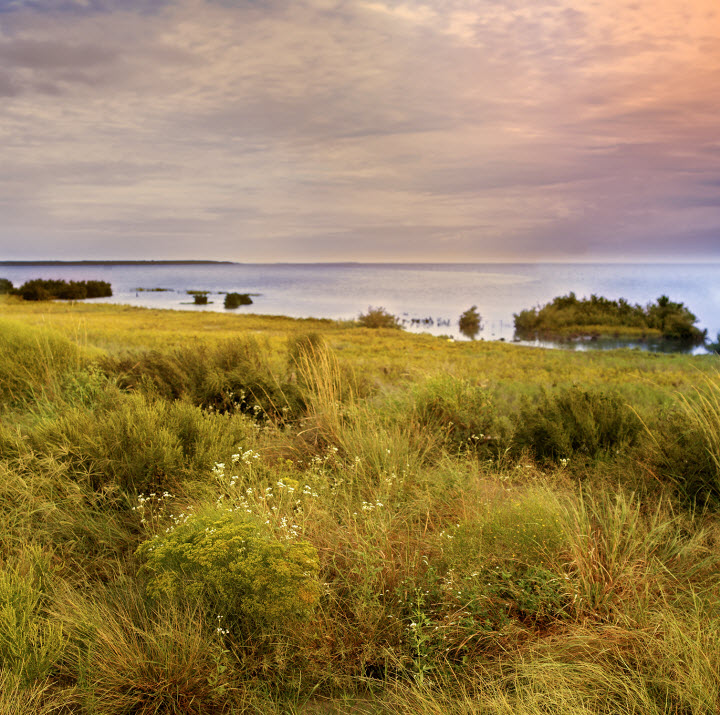 This is one of a series of images I did for a local land developer; he wanted to show the beauty of this parcel of land before they started to develop it for a high end sub-division. It is a narrow strip of land bordering the Laguna Madre.

I made several trips to the site looking for the best light. This was my favorite shot, which was used for the cover of a pre-development, early bird buying brochure. The power of this photograph helped sell out all the lots within a year. 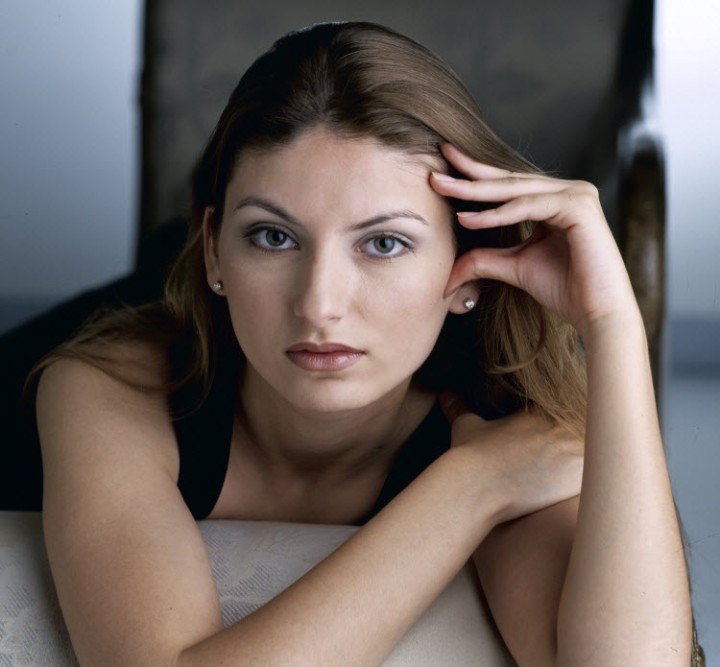 I keep my eyes open for interesting people that I might like to photograph wherever I go. I was having lunch with a client at a really nice restaurant recently when I spotted this attractive young woman across the room. She was working as a waitress and exhibited an extraordinary amount of grace and elegance.

After lunch I approached her and introduced myself. She was a little apprehensive at first, but then my client jumped in and said, “If he wants to photograph you, do it — you’ll really be glad he did!” and so she agreed.

The next Saturday she came to the studio and we made a ton of pictures. She was extremely natural in front of the camera and we got some great shots — this is one of my favorites. Since then I’ve used her as a paid model on several assignments.

One of the joys of photographing people is getting to make new acquaintances and sometimes even friends and colleagues. 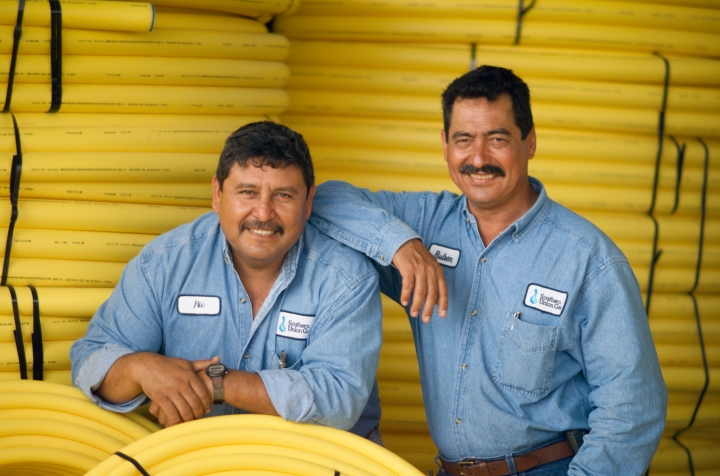 This portrait was part of a series I did for the Southern Union Gas Company’s annual report.  They were featuring all the great people that worked for them as the part of the reasons for their great service to their customers.

I was supposed to walk all around their facilities accompanied by the company’s representative. I was a bit apprehensive about this approach because we were catching people completely by surprise and I was a little afraid of how they would react.  Fortunately, everyone I approached in all the different departments was extremely gracious and felt honored to be included in this prestigious company document.

This was one of my favorite images from the series. It was a blistering 103 degree South Texas Day with humidity in the 70% range. Yet these two guys gave me their all. What troupers!

I found these huge coils of bright yellow plastic tubing piled up very high and thought what a great background to play against their blue shirts. The sun was behind the tubing so when I positioned my subjects in front they got a little shade. Me, on the other hand was standing in the full sun. Tell me again why I don’t like the winters of Michigan. I sure could have used some right then. I was using a Nikon digital camera with a 70-200 mm lens.

There is nothing sweeter than pulling off a difficult shot. 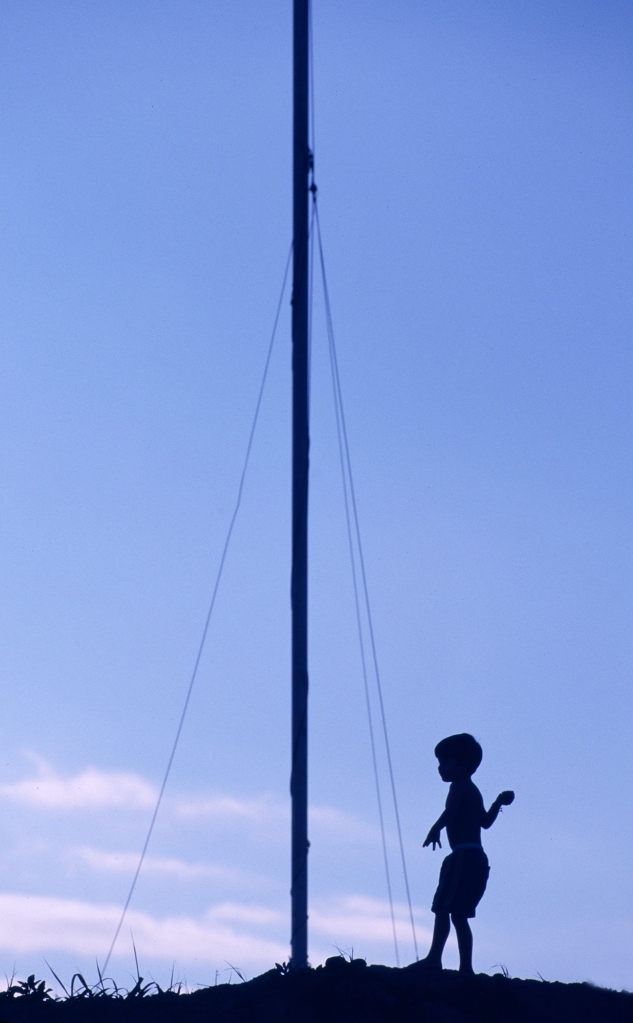 I have to admit. This was a very unusual photograph.

I was walking along the South Padre Island beach one evening, enjoying the sound of the tide coming in and looking for things to photograph when I saw this little boy up on a sand dune.  As I watched him, he seemed to be dancing around this pole. I assume it was the mast to a sailboat that was hidden behind the dune.

As I watched him ran around it and assumed various strange and wonderful poses of his own making, I suddenly realized – if the pole was a sailboat mast hidden behind the dune, how could he be running around it? 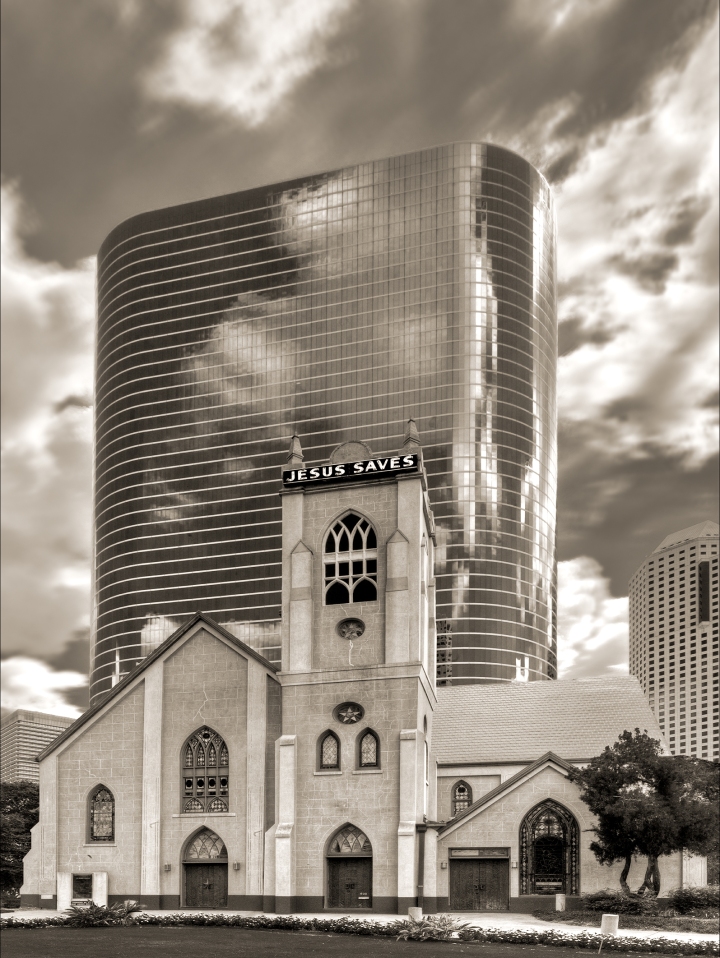 This is one of those photographs that you come across from time to time that just really reaches out and grabs you.

I was on one of my many foot tours around downtown Houston when I found myself in the middle of, what used to be Enron Center.  I made a few images there, then moved on. As I did I came upon this little stone church snuggled right up against Enron Center. I found the church to be quite architecturally interesting. As I was walking around it, looking for the best angle, I saw the huge Enron tower overpowering it. Simultaneously, I noticed the phrase “Jesus Saves” on the church tower, and instantly thought this is the picture.

I love finding images like this, but it only happens if you’re out there looking. So grab your camera, put on your walking shoes and see what you can see.